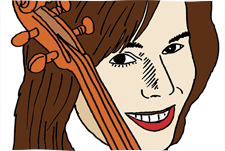 On May 25 at the Saint Anna’s Church in České Budějovice, the South Czech Philharmonic gave world premiere to a Concerto for Violin and Orchestra by a violinist and composer Pavel Fischer (*1965). The piece is dedicated to Helena Jiříkovská who recently replaced Fischer in the position of the Škampa Quartet’s first violinist which he had been holding for 20 years before deciding to become a violin professor at the universities in Manchester and Birmingham.

“Just like in all of my previous pieces, the concerto’s musical language is influenced and formed by various non-classical genres, from folk music to jazz,” the author said. “Most of the motives are of a syncopated character while the final movement adopts the rhythm of a Bulgarian dance ‘Râčenica’.” Going to be repeated tonight, the concert’s programme also includes the Fantasia on a Theme of Thomas Tallis by Ralph Vaughan-Williams and Haydn’s Symphony No. 101 in D major ‘The Clock‘. The orchestra is led by its chief conductor Jan Talich.