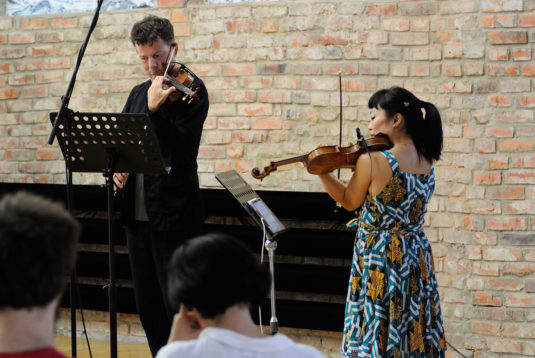 As would be expected, the 10 days and 22 concerts of the 9th year of the contemporary music biennale Ostrava days included several Czech premieres. From those by Czech authors they were first of all the chamber Nothing is Free by Petr Cígler, September by Petr Bakla and The Long Sentence II by Michal Rataj.

All of them were performed during the festival’s second day, August 25, at the already traditional venue of the Hlubina coal mine by the American first-class violin duo String Noise, a long-standing guest of the Ostrava days. The last piece was accompanied by the electronics (played by the author). From Rataj’s pieces, the audience also had a chance to hear the not coincidentally 89-second-long Glassy Fragile written for an exhibition commemorating the 25th anniversary of the so-called Velvet Revolution. The programme also included pieces by Georg Friedrich Haas and Alex Mincek.