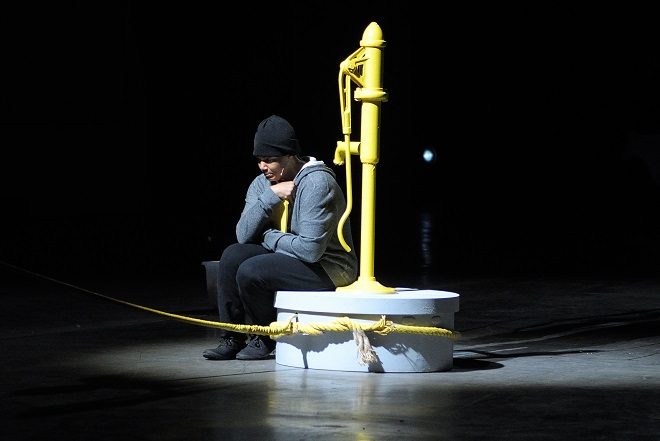 One of the most eagerly anticipated events of this year’s Ostrava Days was undoubtedly the first Czech performance of Miroslav Srnka’s chamber opera Make No Noise. Written for five voices, thirteen instruments and electronics, the work was commissioned by the Bavarian State Opera and last time performed in August 2016 at the Austrian festival Bregenzer Festspiele.

The libretto by Tom Holloway (who is also the librettist of Srnka’s other opera, South Pole) is based on a 2005 film The Secret Life of Words by a Spanish directress Isabel Coixet. Two traumatized individuals accidentally meet on an oil platform and learn step by step to communicate and trust again… The production was directed by Jiří Nekvasil and conducted by Joseph Trafton. The cast remains – but for one exception – the same as last summer in Bregenz, thus Measha Brueggergosman, Holger Falk (as the central couple), Katalin Károlyi, Taylan Reinhard and Maciej Idziorek. The instrumental parts were played by members of Ostravská banda.