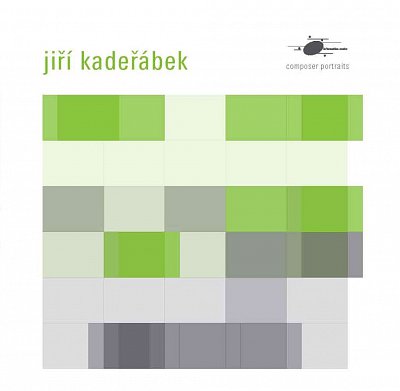 Portrait of the composer Jiří Kadeřábek.
Listen to an excerpt on Bandcamp.
Would you like to get this CD? Send us an e-mail.

Jiří Kadeřábek was born in Zlín, Czech Republic into an arts-loving family. At the beginning, he was also significantly influenced by the strong and living Moravian folk tradition. He played, sang and, later on, composed jazz, rock and pop music, and also devoted to literature, the visual arts, theatre and film. After moving to Prague, he initially studied mainly non-art composition and piano at the Jaroslav Ježek Conservatory and subsequently solely art composition at the Academy of Performing Arts in Prague, where in 2012 he received a Ph.D. During the time of his studies, he participated in several composition workshops, residencies and private consultations in the Czech Republic, the Netherlands, France, Italy and the USA; most notably, in 2005 he attended a three-month residency for composers at La Sacem in Paris, where he was acquainted with the latest compositional methods and technologies. Studying within an Erasmus scholarship at the Royal Conservatory of The Hague in the 2008/09 academic year served for him to look back on and integrate his previous creative and interpretational experience in multi-genre and multi-media compositions. Upon the invitation and under the guidance of Tristan Murail, he spent the next year as a Fulbright Scholar at Columbia University in New York, which created a certain platform for his work and where he has returned frequently ever since. Kadeřábek’s music, “capturing a peculiarly evocative image” (New York Times), “well crafted and compelling with its playful banter” (New York Arts), “reminding of cubist paintings by Picasso”, “with the aim of nullification of progression and logical association, the establishment of timelessness” and “almost always revealing some mischievous coup de théâtre, curiously shocking yet at the same time incontrovertibly one with the work” (BBC), has garnered numerous awards and nominations, been commissioned and performed by orchestras and ensembles of such renown as the BBC Symphony Orchestra, Prague Radio Symphony Orchestra, PKF – Prague Phiharmonia, Anhaltische Philharmonie, Slovak Philharmonic Choir, New Juilliard Ensemble, Ostravská Banda, Orchestr Berg, Fourbythree, Sybarite5, Ensemble Montage, Ensemble Calliopée, Fama Quartet, presented at festivals, including MoMA Summergarden, Prague Spring, Moving Sounds, Music with a View, Trieste Prima, Noorderzon, Ostrava Days and Contempuls, and broadcast by radio and television stations, such as the BBC, Czech Radio, Czech Television, VPRO and OOG (the Netherlands), Magyar Rádió and Radio Slovenija. In 2012, a Kadeřábek piece represented the Czech Republic at the International Rostrum of Composers in Stockholm.

In his music, Kadeřábek confronts various compositional approaches, applies computer assisted composition techniques and integrates the principles or fragments of historical as well as jazz, pop and rock music. He works frequently with microtones, recorded real sounds integrated into the musical structure, and employs various theatre elements. For the most part, his pieces contain a certain political or social accent and many semantic levels; the composer himself views them as “polygons with their inner sides from mirrors, owing to which each side can be viewed and re-viewed, every time from a different perspective”. The composers and musicians Leoš Janáček, Charles Ives, Tristan Murail, Heiner Goebbels, Helmut Oehring, Chick Corea, Herbie Hancock and David Bowie, the visual artists and performers Andy Warhol, Richard Prince and Marina Abramović, the filmmakers David Lynch and Jan Švankmajer, and the writers Bohumil Hrabal, Fyodor Mikhailovich Dostoyevsky and Haruki Murakami all serve Kadeřábek as permanent models and sources of inspiration. He himself, however, never anticipates in which direction his work will proceed. “Composer Jiří Kadeřábek is an essentially creative man of many talents, wide interests and the unusual ability to keep aiming beyond himself. Never content to stick with what he has achieved, he is more willing than most to keep striking out into uncharted territory. He keeps surprising.” (Czech Music Quarterly).
www.jirikaderabek.com