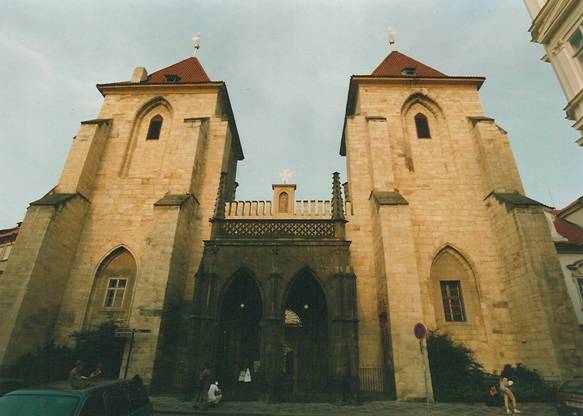 The 27th year of the Days of Contemporary Music festival started on 2nd November in Prague. Organized by the Society of Czech Composers, it will stage nine concerts and present 55 pieces by Czech contemporary composers.

The opening concert was held at the Church of Virgin Mary under the Chain in Lesser Town of Prague. Its program included four world premieres of new pieces, three of them chamber and one choral. The first one was Sedmero Roubení (Seven Timberings) by Stanislav Jelínek (*1945) for mezzosoprano and organ which was performed by Dana Dubová and Drahoslav Gric. Pavel Trojan’s (*1956) Four Essays for trumpet and organ followed, played by Vilém Hofbauer and Petr Čech. František Jaroš (violin) and Marek Babka (cello) premiered Diaphonia by Milan Křížek (*1926). The concert was closed by Ubi caritas / Where God Is, Love is by composer and guitarist Vilém Zelenka (*1987). It was performed by Bubureza female choir led by Miloslava Vítková and Lukáš Vencovský as a solo guitarist. The audience also had a chance to hear music by František Fiala and Jan Fila.

One day later another concert took place in the same location, this time a choir one. Made in cooproduction with the Society of Contemporary Music, it presented the prize-winning pieces of the Society’s competition in composition. Those receiving their world premiere included Chvalte Hospodina všechny národy (Praise the Lord, All Nations) by Jan Bernátek (*1950), Dignus est Agnus by Petr Chaloupský (*1964), Ave Maria by Michael Korbička (*1979) and Motet (Psalm 44) by Jan Vrkoč (*1969). As far as the non-competing pieces are concerned, Olga Ježková’s (*1956) Christus factus est et Magnificat was performed with Walter Hofbauer on trumpet, as well as Missa Campanarum for female choir and audio recording by Radek Rejšek (*1959). The latter composition was sung by the Prague Singers led by Stanislav Mistr, the rest by the Prague Cathedral Choir led by Josef Kšica and Miloslava Vítková.