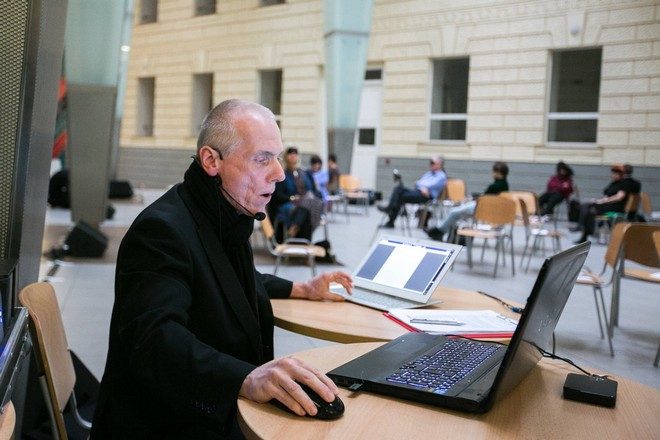 Opera povera ensemble introduced a second part of their experimental project Echo – Metamorphoses, subtitled “All that connects sound and space can become an opera.” It was created by Rocc (*1979), Slovenian opera director and opera povera’s art director, and composer and musicologist Vít Zouhar (*1966).

“Content-wise, we tried to return to the original inspiration of the very first operas from the turn of the 16th and 17th century, to the ancient Roman poet Publius Ovidius Naso and his epic work Metamorphoses,” Rocc explained. Apart from the authorial duo, who is mixing the ready-made electronic musical material according to their current mood, the only other performer is soprano Natalia Ushakova. The audience is encouraged to wear a black mask over their eyes during the whole (slightly more than an hour-long) performance so that they can concentrate exclusively on the sound.

The work has so far received three performances: on Nov 2 in Brno as a part of the Meetings of New Music Plus international music festival, on Nov 3 in the Czech Museum of Music, Prague during the music theatre festival OPERA 2017 and on Nov 5 in Olomouc (festival Opera Schrattenbach).

2 Nov, Atrium of the Faculty of Social Studies of Masaryk University, Brno

5 Nov, Atrium of the Art Centre of Palacký University, Olomouc