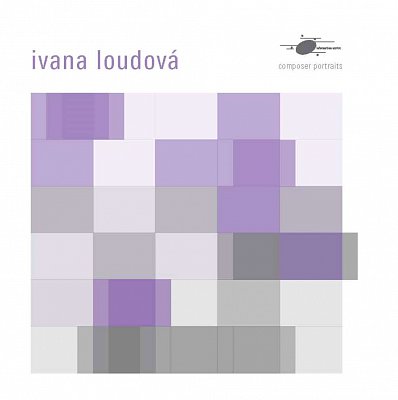 Portrait of the composer Ivana Loudová.
Listen to an excerpt on Bandcamp.
Would you like to get this CD? Send us an e-mail.

Ivana Loudová studied composition at the Prague Conservatory with Miloslav Kabeláč and at the Faculty of Music of the Academy of Performing arts (HAMU) with Emil Hlobil, where she continued as a postgraduate, again with Kabeláč. In 1971 she received a scholarship from the French government to study in Paris with Olivier Messiaen and André Jolivet, and at the same time at the experimental studio of the Centre Bourdan de l’ ORTF with Pierre Schaeffer. After completing her studies (1972), she was a freelance composer, working for radio, theatre and film. In 1980 and 1997 she was composer- in-residence with the american Wind Symphony orchestra in Pittsburgh, for which she wrote a number of compositions (Chorale, Hymnos, Concerto, Magic Concerto, Dramatic Concerto, Luminous Voice). Her music earned her accolades at Czech and foreign composition competitions (Jihlava, Jirkov, Olomouc, Prague, Mannheim, Arezzo, Moscow, Verona). In 1993 she received the Heidelberg award. She has led composition classes in the USA, Germany and Austria. Since 1992 she has taught at the department of Music Theory and History of HAMU, since 2006 as professor of composition. In 1996 she founded Studio N, with which she has pursued numerous activities relating to discovering 20th and 21st century music. She is the author of the book Modern Notation and its Performance (published by the Edition Centre of the Academy of Performing arts in 1998). In her compositions, she has applied modality and new music techniques. She has mainly focused on chamber, symphonic and choral music, with a large part of her oeuvre being formed by pieces for children.

Her best-known orchestral compositions include Spleen – Hommage à Charles Baudelaire and Chorale for Orchestra, which served as the inspiration for more than 500 graphic works displayed at the collective exhibition “Vom Ohr zum Auge” in Munich (1994), two symphonies, the Concerto for Chamber Orchestra and the ballet music Rhapsody in Black. As regards chamber pieces, the most noteworthy are Air a Due Boemi, Gnómai – Trio for Soprano, Flute and Harp, String Quartet No. 2 “To the Memory of Bedřich Smetana”, Nocturne for Viola and Strings, Monument for organ, Veni etiam for six wind instruments in space, Planet of Birds I–III, Canto solitario, and the song cycle Lunovis. Young performers are particularly fond of her sonatas (for violin, clarinet and trombone with piano accompaniment). When it comes to her vocal compositions, the best-known include Kuroshio – a dramatic fresco for soprano and mixed chorus, the Small Christmas Cantata for children’s choir, trumpet and harp, the Sonetto per voci bianche, the Italian Triptych for mixed chorus, Happiness for mixed and children’s choir, The Little Evening Music for oboe and mixed chorus, the cantata Proverbial Wisdom for soli, children’s choir, recorders and percussion, and Message for large boys’ choir. Ivana Loudová’s music has been published by Panton, Supraphon, C. F. Peters, G. Schirmer, Joshua Corp., Computer Music, BIM Editions, Edizioni Suvini-Zerboni, Schott International and Editio Bärenreiter.