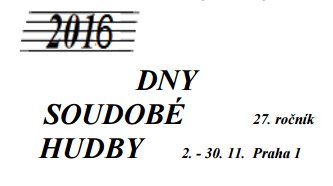 Three concerts of Czech 20th and 21st century music took place during the second and third week of the Days of Contemporary Music festival. All of them were held in the halls of the Academy of Performing Arts in Prague.

The festival has since long been focusing on premiering new pieces and the concert on November 7 was no exception. Obsession by David Lukáš (*1981) was performed for the first time by Kristina Vaculová (flute) and Stanislav Slavíček (piano). The audience also had a chance to hear music by Martin Klusák, Jiří Matys, Karel Husa, Elena Kiral and Jiří Smutný.

Concert of orchestral and spiritual music organized in collaboration with the Music Centre of West Bohemia on November 14 was opened with a world premiere of Concerto for Cello and Orchestra by Karel Pexidr (*1929). The renowned Petr Nouzovský was accompanied by Quattro Chamber Orchestra conducted by Marek Štilec. The second half of the evening was dedicated to O, Mother Earth, oratorio by Zdeněk Zahradník (*1936) performed by not only the Quattro Orchestra, but also by Akademičtí komorní pěvci choir, Kristina Kubová (mezzosoprano), Petr Kolář (bass) and Dagmar Kolařová (organ).