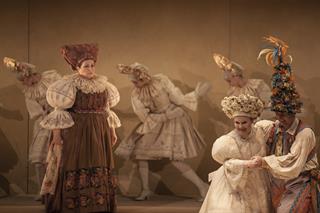 On 26 February Janáček’s Jenůfa was given its premiere at Teatr Wielki in Poznań, Poland, exactly ninety years after the last performance of the work there. The production was created by the famous Latvian director Alvis Hermanis two years ago at La Monnaie, Brussels, where it was conducted by Ludovic Morlot. In Poznań Gabrial Chmura took on the task. The main goal of Hermanis, who himself visited Moravia several times, was to faithfully depict the cultural richness and unique aesthetics of this region.

The leading roles are sung by Monika Mych-Nowicka (Jenůfa), Barbara Kubiak (Kostelnička), Rafał Bartmiński (Laca) and Piotr Friebe (Števa). Two days into the premiere the theatre organized a panel discussion about the work attended among other by the The Théâtre de la Monnaie’s dramaturge Krystian Lada or Krzysztof Moracewski, Professor of Cultural Studies; the premiere itself was preceeded by a public talk with the production’s director. Jenůfa is sung in the original Czech with Polish subtitles and is going to be staged twice only in this season.