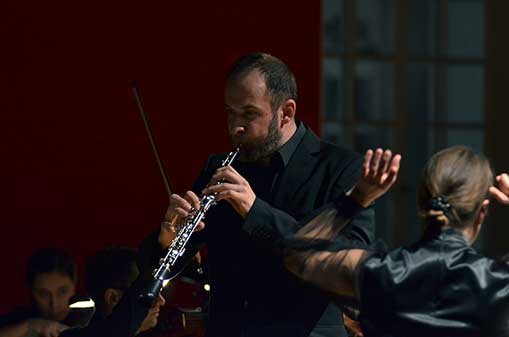 Ondřej Kyas’s (*1979) Chamber Symphony no. 2 for oboe, piano, percussion and strings received its world premiere on this year’s first concert of the Brno-based Ensemble Opera Diversa, which took place on 10th February at the Reduta theatre in Brno. A part of the ceremony was the presentation of the ensemble’s very first CD which consists of Jan Novák’s oboe and piano concertos. The author, who is one of the ensemble’s founding members, wrote the piece especially for this occasion; it was performed by the two soloists who appeared on the CD – the oboist Vilém Veverka and pianist Alice Rajnohová.

The Chamber Symphony consists of one sentence only and is over 20 minutes long. According to the author it reflects his conception of instrumental music in the sense of being an “abstract drama”, while the term “Symphony” in the title he perceives as “a dynamic form endeavouring to create some kind of an immanent musical narrative, to tell a story – abstract it may be, but still a story.” The ensemble also performed a piece called pro P.A.S.ti for oboe and strings (1973) by Ondřej Štochl which was written on the ensemble’s commission in 2014, and 2 works by Jan Novák – Odarum concentus for string orchestra (1973) and, last but not least, the above mentioned Concerto for piano and string orchestra (1949). Ensemble Opera Diversa was conducted by Gabriela Tardonová.