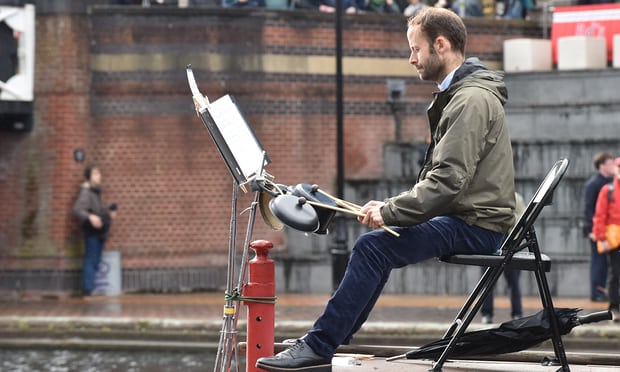 Next commission for the internationally acclaimed Ondřej Adámek came from BCMG, Birmingham Contemporary Music Group. They invited him to join their Canal Serenade on Narrow Boats project, a celebration of Birmingham canals and their busy trade history. On September 10 then, what was being exchanged on those boats were not goods but musical ideas…

Three composers took part in the project: Adámek, Yannis Kyriakides (Cyprus) and Richard Baker (UK). Together with musicians, each of them was placed on a boat floating on one of the three Birmingham canals until they all united at the canals’ meeting point. Adámek’s Share the Space for three percussionists and sixteen vocalists was then at the end blending with (in addition to the English rain) Kyriakides’s Music for Barges for trombone and electronics and Baker’s Birmingham Canal Songs for tenor, accordion and percussion. The event received one repeat performance on September 23.