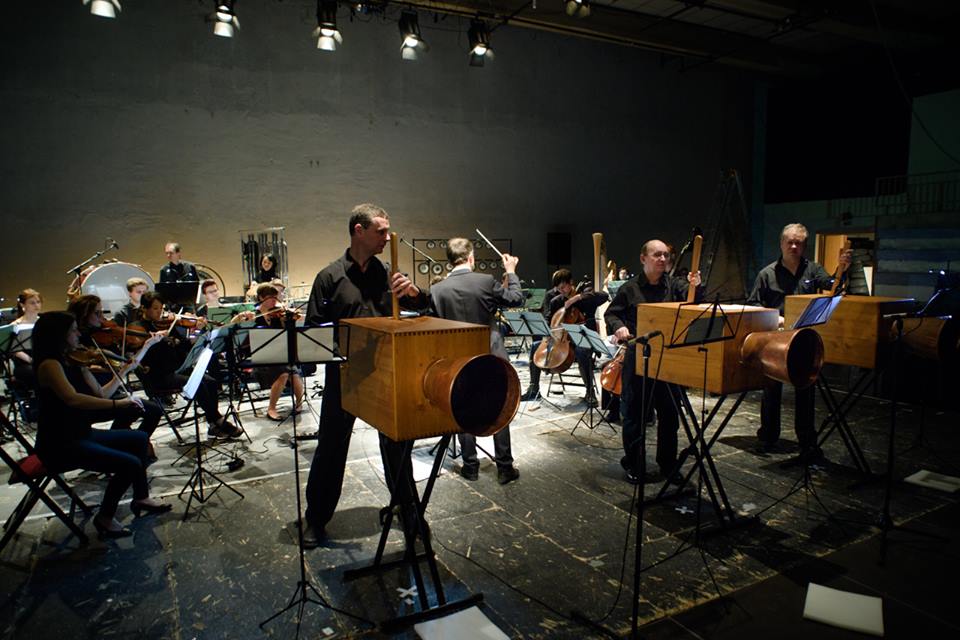 An attractive musical programme was presented on 9 April in Studio Hrdinů (Trade Fair Palace, Prague) by the BERG orchestra. The concert named Archeology of the 20th century introduced John Cage’s renowned Radio Music, a Czech premiere of Graffiti, a piece by an internationally acclaimed Korean composer Unsuk Chin, Archeologia del telefono. Concertante for 13 instruments by Salvatore Sciarrino and as a highlight of the evening a concerto for noise instruments (intonarumori) by Miroslav Pudlák (*1961).

Howler, Scraper and Crackler are unique replicas of instruments invented and built by musical experimenter and futurist Luigi Russolo which belong to Prague-based Opening Performance Orchestra. Unlike Russolo’s generation, who planned to turn intoramuri into a full replacement of the traditional orchestra, Pudlák sought to make a connection between these two audially contradictory worlds. The result of this “hybrid fight – orchestral harmonies and colours versus noises and creaks”, as the author characterized the piece in the programme annotation, is, however, less an expression of discord or tension than a fascinating sound synthesis, a dialogue where the intonarumori are permanently tuning up to the orchestra, thus creating unexpected colourful and harmonic moments. The twenty minute-long, three-movement piece received an enthusiastic ovation. The performers played under the lead of BERG’s chiefconductor Peter Vrábel.

Archeology of the 20th Century