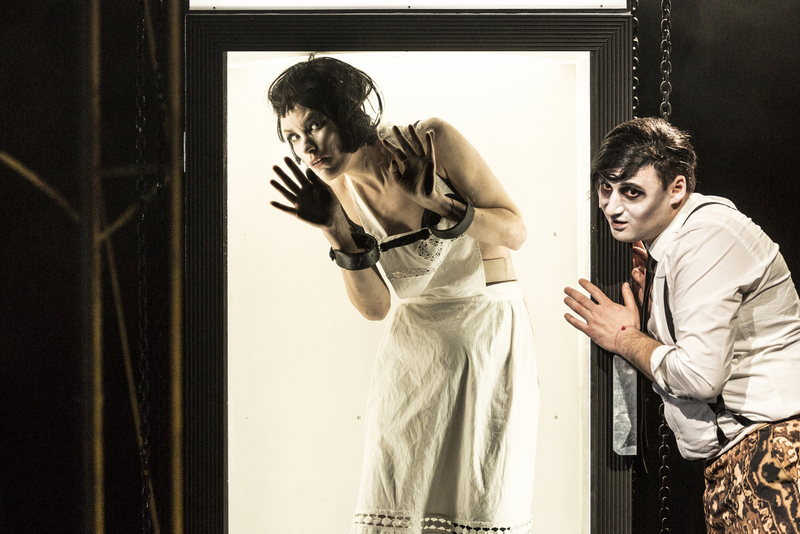 On 7 April, the New Scene of the National Theatre in Prague presented the long-awaited premiere of the opera adaptation of Ivan Klíma’s mystery novel The Sufferings of Prince Sternenhoch. Its author, primarily a scenic music composer and musical autodidact Ivan Acher (*1976) had already written music for the book’s theatre adaptation at Divadlo Komedie eleven years ago; now, he topped his interest in this literary work off with an all-night opera under the simple title Sternenhoch.

Acher himself also wrote the libretto, which is sung curiously translated into Esperanto, and chose the cast – Sergej Kostov as the degenerate nobleman, Vanda Šípová as his balancing-on-the-verge-between-life-and-death wife Helga, Luděk Vele (Helga’s father) and Jiří Hájek (Bard/Lover). The role of Kuhmist, the witch is sung by violinist and violist Tereza Marečková, simultaneously a member of the instrumental ensemble where she is accompanied by Lukáš Svoboda (contrabassoon), Michal Müller (zither), electronics and pre-recorded sounds, the conductor is the artistic director of National Theatre Opera and State Opera Petr Kofroň. Those, whose interest has been sparked by the positive critical response, praising different aspects of the performance from Acher’s demonic, stylistically ambivalent music and the performance of the cast to Michal Dočekal’s direction, will have two more opportunities to see Sternenhoch this season – on 13 May and 24 June.

7 April 2018, New Scene of the National Theatre in Prague, Prague