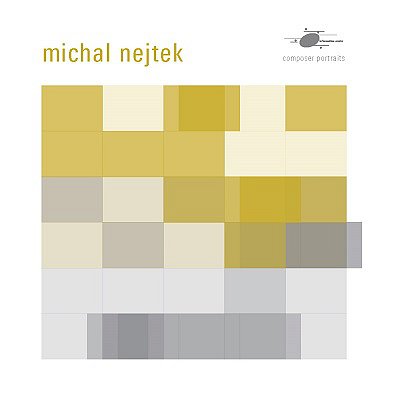 Portrait of the composer Michal Nejtek.
Listen to an excerpt on Bandcamp.
Would you like to get this CD? Send us an email.

Born in Litoměřice, studied composition and the piano at the Teplice Conservatory, from which he graduated with George Gershwin’s Concerto in F, accompanied by the North Bohemia Philharmonic Orchestra Teplice. He continued to study composition at the Faculty of Music of the Academy of Performing Arts in Prague under the guidance of Svatopluk Havelka. His graduation work was the chamber opera Dementia Praecox, which was premiered within the New Music Marathon 2001 and whose subsequent performance at the Opera 2003 festival received the Prize of the Festival Director. in 2014, Nejtek completed his doctoral studies in composition and theory of composition at the Janáček Academy of Music and Performing arts in Brno (the thesis Synaesthesia as a creative and perceptive factor in contemporary musical-theatre pieces, printed by the academy’s publisher).

Nejtek’s works have won awards at the Generation competition (in 1999: 1st prize for Procitání – Pět písní na verše B. Reynka / awakening – Five Songs to Poetry by Bohuslav Reynek, in 2000: 2nd prize for Sestup na hlubinu ticha / Descent into the Depth of Silence, and in 2001: 2nd prize for Ballo Nella Notte). He also received the Leoš Janáček Foundation Prize in 1999. The recording of Ballo Nella Notte was selected by Czech Radio to participate in the International Rostrum of composers in Paris. in 2000, he attended the summer courses in Darmstadt, where the piece Dvě dívky v prostoru s objekty / Two Girls in the Space with Objects was performed, and in 2001 he participated in the Warsaw Autumn Festival with the work Music for 18 Strings. In 2001, Nejtek was commissioned to write new compositions for the Warsaw Autumn Friends Foundation (Distress Sonata, performed by the New Music Orchestra Katowice at the Warsaw Autumn in 2002) and the Donaueschinger Musiktage (Thorn into the Flesh, premiered at the festival in 2002). In 2003, the Netherlands’ Orkest de Volharding commissioned from him a piece for their concert in Prague (Irritating of Inland, premiered at the archa theatre in 2003). In 2006, the Klangspuren Schwaz festival in Austria premiered his composition Frame Dreams. Nejtek’s music has also been performed at the festivals Wien Modern (2003), Festiwal muzyki Nowej (Bytom, 2003), Forum Neuer Musik (cologne, 2004), Artacts ’04 – Festival für jazz und improvisierte Musik (St. Johann in Tirol, 2004), Dartington International Summer School & Festival (2004), Music Gallery (Toronto, 2006), Trieste Prima (2009), Prague Spring (2012), Contemporary Night (Budapest, 2013) and Music Olomouc (2014).
He has collaborated with the czech rock band the Plastic People Of the Universe, for whom he has prepared the orchestral version of the project based on texts by the czech author Ladislav Klíma etc., which was premiered in 2002 at the Roxy club in Prague; arranged the legendary Passion Plays, premiered at the Archa theatre in april 2004, recorded and released on cD. Based on Vratislav Brabenec’s libretto, he has written for the Plastic People Of the Universe and the Agon Orchestra the “railway opera” Lysá nad Labem, which was premiered in 2007 at the Meet Factory centre in Prague. in 2014, Nejtek instrumented the Plastic People Of the Universe’s concept album Leading Horses for the Brno Philharmonic Orchestra.
Another of Michal Nejtek’s extensive works is the stage madrigal Lamenti for five voices and seven instruments, thematically based on Claudio Monteverdi’s Lamento d’Arianna, which was, just as previously his opera Dementia Praecox, directed by Jiří Heřman. The piece was premiered in November 2004 at the Roxy in Prague and subsequently performed within the 4+4 Days in Motion festival in May 2005 in Prague and in October of that year at the Cena contemporânea festival in Rio de Janeiro.
For the past decade or so, Nejtek has also composed incidental music, with the drama productions including Já je někdo jiný (I is Someone else, directed by Arnošt Goldflam, 2003, Hradec Králové); U cíle (Destination, directed by Arnošt Goldflam, 2004, Komedie theatre in Prague); Klářiny vztahy (Klara’s Relationships, directed by Ivan Řezáč, 2005, Švanda theatre in Prague) etc.
His music for the production Exit 89 (directed by Jiří Havelka, 2008, Archa theatre in Prague) earned him a nomination for the prestigious Alfréd Radok Prize. In 1998, Nejtek began working as a pianist, composer and dramaturge for the Agon Orchestra, who in 2002 gave at the Archa theatre a profile concert featuring his pieces. Over the long term, he has written music for the Moens ensemble and the Berg Orchestra Nejtek has regularly performed contemporary music as a soloist (e.g. a concert made up of John Adams’s works; the solo piano part in Alfred Schnittke’s Symphony No. 1, performed by the Hradec Králové Philharmonic under the baton of Marko Ivanovič in October 2012) and chamber player alike.
From 1995, Nejtek performed in the Prague-based jazz bands jazzbox, Four Roses and lee Davison; later on he joined Jaromít Honzák’s jungle-jazz formation Face Of the Bass (the CD Face Of The Bass, 2011) and the Band limbo (the CD Out Of Body, 2009). he currently leads the punk-jazz-experimental unit NTS (Nejtek-Tichý-Smetáček, the CD Libido Trip, 2009; the lP Permanente Frustration, 2011; the DVD Permanente Live, 2012; the DVD Genuine, 2014), and plays with the rock musician David Koller’s new band. Since 2012, he has collaborated with the guitarist Michal Pavlíček (Michal Pavlíček and trio), with whom in the autumn of 2013 he made an acoustic tour in a duo.
From 1995 to 1998, Nejtek taught the piano at the Primary art School in Litoměřice; between 1998 and 2008, music theory and piano improvisation at the Teplice conservatory; and from 2006 to 2010, he taught the history of jazz and composition at the Jaroslav Ježek Conservatory in Prague. He has occasionally written reviews for the music magazine Harmonie and the newspaper Hospodářské noviny. Nejtek considers composing and performing music a sort of adventurous walk through the jungle and therefore has an endless fascination with it.