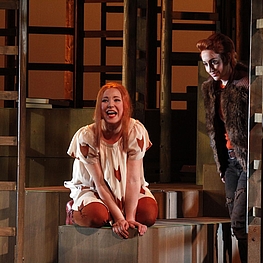 The praise has concerned mainly the direction by Mascha Pörzgen, who perfectly balanced both levels of the story – a beast fable and an allegorical drama – and the performance of the orchestra under the direction of Theater Hagen’s music director Joseph Trafton. The leading roles are performed by Dorothea Brandt (Vixen), Jennifer Panara (Fox), Kenneth Mattice (Forester), Boris Leisenheimer alternating with Richard van Gemert (Schoolmaster/Mosquito) or Rainer Zaun (Priest/Badger). Sung in the German translation, the opera will receive nine more performances in the couurse of this season.