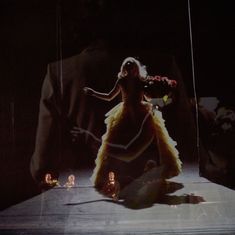 Conductor Will Humburg concluded his three-year-long Janáček cycle at Staatstheater Darmstadt with a new production of The Makropulos Affair. The theatre’s general music director is already an expert when it comes to the Moravian composer; apart from Jenůfa and The Cunning Little Vixen in Darmstadt, he had also conducted Katya Kabanova a couple of years ago in Bonn.

The directress Eva-Maria Höckmayer tried to depict especially the various perspectives from which the heroine has been looked at by all the men in her long life, which she does using multiple, sometimes overlaying video-projections. The title role is sung by Katrin Gerstenberger, a soprano who has also starred in Darmstadt’s both previous Janáček productions – first as the Fox, then as Kostelnička. The cast also includes Stefan Adam (Jaroslav Prus), Krzysztof Szumanski (dr. Kolenatý), Thomas Piffka (Albert Gregor), Michael Pegher (Vítek) and others. Sung in German, the opera will receive four more performances before the end of this season.