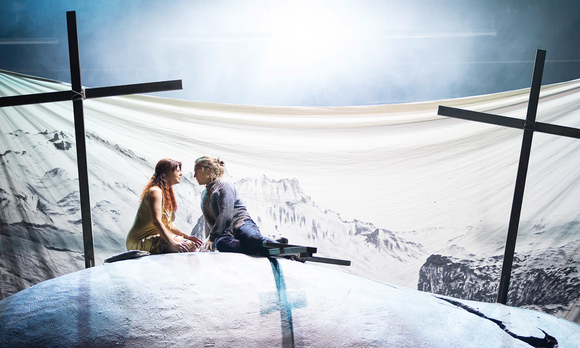 On 5 March the Austrian Oper Graz premiered a new production of The Greek Passion (1954-1959), Bohuslav Martinů’s opera masterpiece. One of the reasons for choosing this work particularly is without any doubt the topic of Martinů’s libretto, based on the novel of the same name by the Greek author Nikos Kazantzakis, whose plot, depicting the arrival of the refugees from a village raided by Turks to a neighnouring one at the time of preparation of the following year’s Passion Play performance, resonates extremely well with the world’s present day issues.

The piece was directed by Lorenzo Fiorini, while Dirk Kaften, Oper Graz’s and Grazer Philharmonisches Orchester’s musical director, is conducting; the lead roles are sung by the Swiss tenor Rolf Romei (Manolios), Dshamilja Kaiser (Katerina), Markus Butter (Fotis) and Wilfried Zelinka (Grigoris). The production, which was created in cooperation with the PSALM festival, is sung in Czech and will be staged eight times more in this season. The audience rewarded the premiere by a long standing ovation.