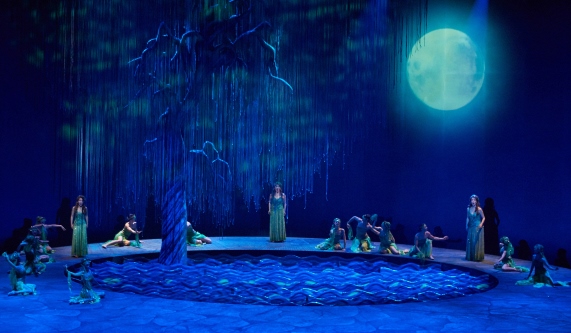 Antonín Dvořák’s Rusalka was performed in South Korea for the first time in history on 28 April in a new production by Korean National Opera. Its cast includes exclusively Korean singers, which is in a country suffering from a lack of qualified opera artists a very unusual phenomenon. Two leading Korean sopranos alternate in the tite role of Rusalka – Yunah Lee, who has already made appearance on many European and American top opera stages including the Metropolitan Opera or New York City Opera, and Sunyoung Seo, the 2011 first prize winner of the prestigious International Tchaikovsky Competition.

For the production’s director, the Korean National Opera’s artistic director Kim Hak-min, the opera’s main theme, which affects the life of every human being, is the contrasts between nature and culture, eternity and temporality, and purity and experience. Meanwhile, the mise-e-scène  seeks to maximize the mystical elements of the story, e.g. by using real water to fall as rain on the stage. Chung Chi-yong, the Seoul Philharmonic Orchestra’s former artistic director is conducting. Sung in the original Czech with Korean and English subtitles, Rusalka is going to be performed four times in total at the Seouls Arts Center between April 28 and May 1.