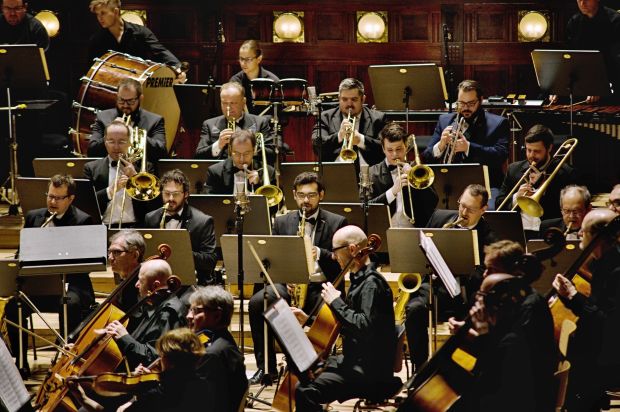 Within their New Horizons cycle, Prague Radio Symphony Orchestra staged a concert called “The Classic in the Hands of Jazzmen”. It was held on 13th February in the Municipal House’s Smetana Hall and, next to the PRSO, it hosted another renowned radio ensemble – Czech Radio Big Band Gustav Brom.

The program consisted of both classical and jazzy popular melodies; the audience thus had a chance to hear in one evening music by Antonín Dvořák, Pyotr Ilyich Tchaikovsky, Johann Sebastian Bach, Modest Petrovich Mussorgsky or Aram Khachaturian, as well as by Sy Oliver, Gordon Jenkins, Billy Strayhorn or Duke Ellington. Moreover, there were two compositions receiving their world premiere. The first of them, Travelling Blues, was composed in one single day by a composer and PRSO’s former conductor Jan Kučera (*1977). The second, Golden Age Rhapsody, was written by the popular actor, musician and composer Ondřej Brousek (*1981) who wished to express “the golden intoxication with the sound, playfulness and childlike rambunctiousness”. The orchestra was conducted by its honorary chief conductor Vladimír Válek, the band by its bandleader Vlado Valovič. The concert was broadcasted live on the Vltava station.

“PRSO and Big Band – the Classic in the Hands of Jazzmen”