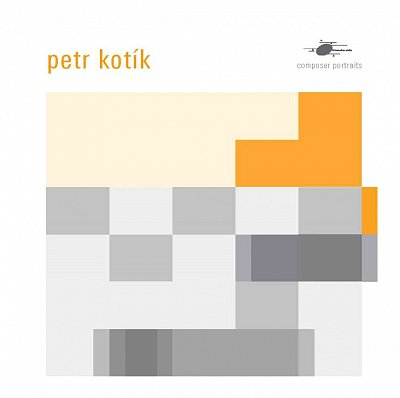 Portrait of the composer Petr Kotík.
Listen to an excerpt on Bandcamp.
Would you like to get this CD? Send us an e-mail.

The composer, conductor and flutist Petr Kotík was educated in Prague and Vienna. In 1961, while at the Prague Conservatory, he founded the ensemble Musica viva pragensis (with which he performed until 1964) and, after returning from Vienna, the QUaX Ensemble (1969–69). In 1970, shortly after his arrival in the U.S., he founded the S.E.M. Ensemble, which expanded in 1992 into The Orchestra of the S.E.M. Ensemble. Since 1997 he has been working with the Janáček Philharmonic Ostrava, and since 2001 has split his time between New York and Ostrava. In the early 1960s, Kotík was active mainly as a chamber musician and soloist. In 1992, Kotík began to work with orchestra, which marked the beginning of his conducting career. After the debut of the 86-piece Orchestra of the S.E.M. Ensemble at Carnegie Hall (with David Tudor on piano), Kotík continued to conduct major events in New York, Berlin, Prague, Ostrava, Warsaw, and Tokyo, as well as opera productions in New York and Berlin. Kotík initiated, commissioned, and co- conducted large orchestra compositions (including three-orchestra works) by Christian Wolff, Olga Neuwirth, Phill Niblock, Alvin Lucier, Somei Satoh, Roscoe Mitchell, Martin Smolka, Bernhard Lang and others. The year 2001 marked the first edition of the biennial Ostrava Days under the direction of Petr Kotík. In 2005, specifically for the festival, Kotík founded the Ostravská banda, an international chamber ensemble for contemporary music, with which he tours as artistic director. In 2012, along with Jiří Nekvasil, the director of the National Moravian-Silesian Theatre, Kotík founded the New Opera Days Ostrava (NODO).
Among Kotík’s best-known compositions are Music for 3 in Memoriam Jan Rychlík(1964), There is Singularly Nothing, to a text by Gertrude Stein (1971–73), Many Many Women, again to a Stein text (1975–78), Explorations in the Geometry of Thinking, to a text by R. Buckminster Fuller (1978–80), Letters to Olga, to a text by Václav Havel (1989–91), Music in Two Movements for orchestra (1998–2002),Variations for 3 Orchestras (2003–05) and String Quartet No. 1 “Erinnerungen an Jan” (2007–12). His percussion trio In Four Parts (2009) has been performed numerous times in Europe and the U.S. Kotík’s Torso (String Quartet No. 2) was premiered in December, 2011 in New York at the Paula Cooper Gallery. The finished piece was premiered by the FLUX Quartet in October 2012 at the Beyond Cage festival in New York. Its Czech premiere was performed by O.B.SQ during the Prague Spring 2013 festival.

Kotík’s discography as a conductor includes John Cage’s Atlas Eclipticalis andConcert for Piano and Orchestra (with pianist Joseph Kubera) on Wergo, John Cage’s 103 and Atlas Eclipticalis (with pianist David Tudor, recorded live at the Konzerthaus Berlin) on a 4-CD Asphodel set, The Turfan Fragments and For Samuel Beckett by Morton Feldman on Dog W/A Bone, Music of Somei Satoh with the Janáček Philharmonic and baritone Thomas Buckner on Mode Records, and orchestra compositions by Roscoe Mitchell and Muhal Richard Abrams on Mutablemusic. Other important releases include Kotík’s Many Many Women on a 3-CD set on Dog W/A Bone and In Four Parts on Mutablemusic, The Entire Musical Work of Marcel Duchamp (with John Cage reading Sculpture Musicale) on Dog W/A Bone, Treatise by Cornelius Cardew (a 2-hour live performance by the QUaX Ensemble, recorded live in Prague in 1967) on a 2-CD Mode Records set. In the fall of 2012 in New York, Petr Kotík initiated and organized perhaps the largest festival commemorating the John Cage centenary, Beyond Cage. The festival featured the Janáček Philharmonic Ostrava and the Ostravská banda. In January, 2013, Kotík performed with the Ostravská banda in a concert for WDR 3 in Cologne, where he premiered his work Nine + 1.