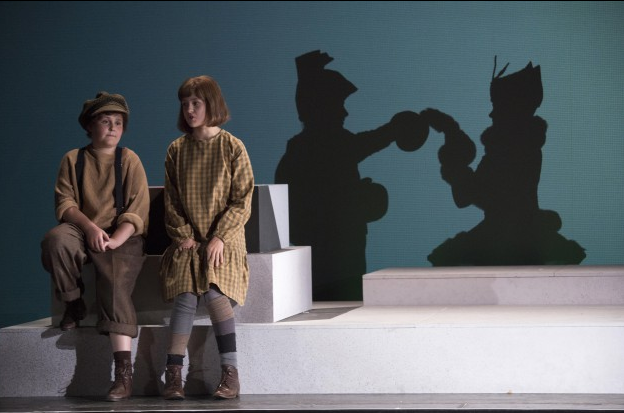 Staatstheater Kassel presented a new production of Hans Krása’s famous Brundibár. The 1938 opera, once sung by children of the Theresienstadt ghetto, was rehearsed by a children choir Cantamus where the soloists were recruited from, too. They were accompanied by the TJO, Theater-Jugendorchester, which is an ensemble formed by talented instrumentalists aged 12-20.

The show is a solo debut by a young directress Franziska Schumacher and Cantamus’s choir leader Maria Radzikhovskyi is conducting. The project emerged in collaboration with Sara Nussbaum Zentrum für Jüdisches Leben in Kassel who ran a series of workshops for the performing kinds in which they learned about Judaism, Theresienstadt and holocaust, as well as about humanity and tolerance. The accompanying program for the public included an exhibition of pictures drawn by Theresienstadt children, projection of the Wiedersehen mit Brundibár film documentary made, among others, by one of the few surviving members of the original Theresienstadt cast Greta Klingsberg, or a concert of music by Theresienstadt composers Hans Krása, Viktor Ullmann and Pavel Haas. In total, there will be six perofrmances during the month of June.