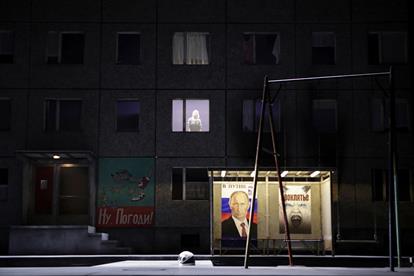 The premiere of a new production of Janáček’s opera Katya Kabanova took place on January 16 at the Hessisches Staatstheater Wiesbaden. The stage director was Matthew Wild, a South African opera director, who is currently working as Artistic Director of Cape Town Opera, and who set the story into a gloomy post-Soviet periphery. Zsolt Hamar, General Music Director of the Wiesbaden State Theatre, is the conductor. The title role of Katya is sung by the Slovenian soprano Sabina Cvilak.

The production, sung in the original Czech, will be held seven times on the stage of the Hessian State Theatre Wiesbaden in the 2015/16 season. Moreover, at the beginning of January the theatre held a “teaser” – a special rehearsal open to public, which gave the visitors insight into the rehearsing process as well as a chance to discuss the new production with the creative team. Two days into the premiere a discussion was held with an author of Janáček’s biography, Michael Füting.