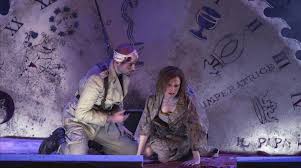 For the first time in its history, Teatro Real in Madrid staged a new production of Viktor Ullmann’s Emperor of Atlantis (1943). Dramaturgically the premiere was a part of the theatre’s special programme series of works composed mostly by Jewish authors in the 1930s and 1940s. Apart from the main attraction, Arnold Schönberg’s Moses and Aaron, the series also included … Read more