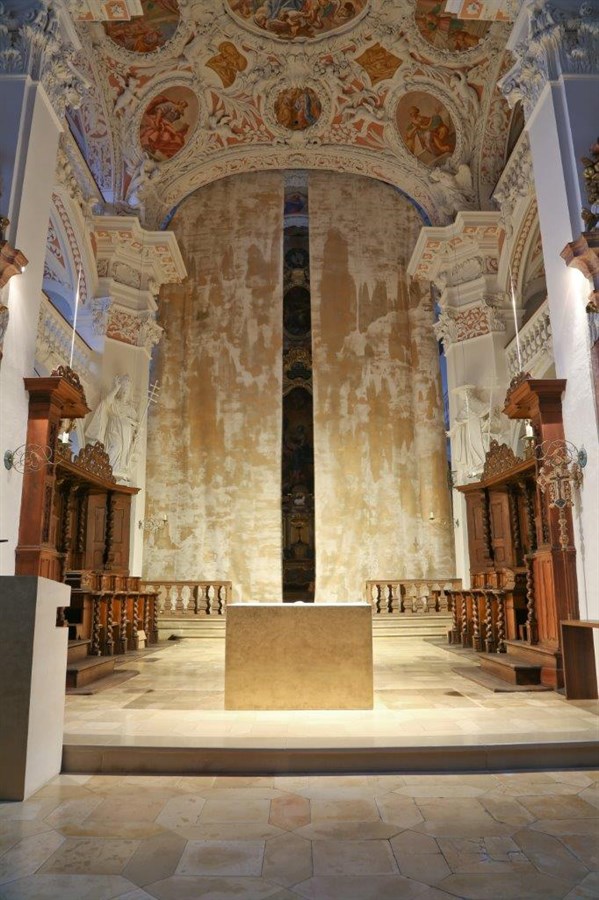 Michal Rataj’s Missa Abstracta accompanied the opening of Patrik Hábl’s art installation at the historical complex of the Speinshart monastery in Bavaria on 26 March. Inspired by the so-called Screen Tearing – a visual artifact created by the disturbance of the display device -, the installation was based on the covering of the nave’s altar area by the monumental canvas specially designed for this occasion, with the only glimpse at the altar being offered by the slit in its middle. The canvas shall be installed for 50 days in total, starting on the Easter Day and ending with the Pentecost.

To compose Missa Abstracta, whose first version version dates back to 2013, Rataj was for 10 years collecting various sounds in the worlds’s different churches. His interest was gradually shifting towards those that often pass unnoticed by the church’s visitors – the creaking of the banks, squeaking of the doors, people’s caughing, sounds created by the manipulation with the liturgical ware… The sounds of the 40-minute long piece are also sparsely accompanied with the piano.” I came to realize that these sounds appeal to me more and seem to be of greater importance than those ‘immanent’ to the liturgy,” the author said. “The recordings of the religious displays in different languages create a wonderful polyphony cultural, emotional and religious attitudes.” After the concert the whole project was presented by Hábl and the exhibition’s curator Eva Čapková. The event was co-organized by the Czech Centre Munich.

Screen Tearing. Art installation by Patrik Hábl at the occasion of Lent and Easter