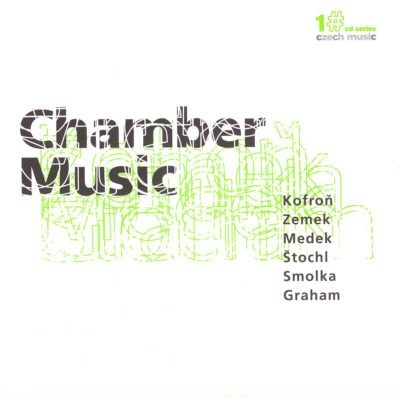 Listen to an excerpt on Bandcamp.
Would you like to get this CD? Send us an email.

This CD is the first in a series that will be published over the next few years and is intended to map the best of Czech music in the last half cen-tury. Through these CDs, which will be distributed free with Czech Music Quarterly once or twice a year, we would like to introduce you to music we believe is interesting, original and unusual – with music that in our view deserves to be heard and enjoyed outside the Czech Republic. For the first CD we have deliberately chosen new or relatively recent pieces. None of the compositions on it has been released before, and so our CD is the only place where you will find them. Our approach has not been to rush into an attempt to produce a repre-sentative cross-section of Czech music from the post-war period to the present and try desperately to cram all the principal movements, composers and works into a mere one or two CDs. Since this CD is only the first of a series, we didn’t feel any pressure to show everything “all in one go”. We were much more interested in putting together a record with a particular atmosphere, a record that listeners will want to come back to and will enjoy just like any other CD. This is why the pieces are presented without any cuts and we have not been concerned about whether one is longer or shorter than another. Each has as much space as it needs.

Petr Kofroň
Tworl (1994)
Jan Šimůnek, Igor Lecian – amplified violin, Jitka Hosprová – amplified viola, Kryštof Lecian – amplified cello
Petr Kofroň (*1955) studied composition at the Brno Janáček Academy of Performing Arts with Alois Piňos, and at the same time privately with Marek Kopelent. Kofroň has been active as a composer since the beginning of the seventies, when his work was based on conceptualism (compositions exploring the extremes of acoustic experience, and the possibilities of the movement of sound through space etc.). After 1975 Kofroň turned to primitive diatonicism and musical sentiment, reflecting his interest in the work of I.O.Dunajevski. After 1983, influenced by the hermetic philosophy of Aleister Crowley, he wrote several ritual compositions. Since 1989 his changing artistic direction can be seen in the transformation of his previously nostalgic music into a more aggressive musical style that does not work with musical parameters but only with the “energy” of the sound, the playing and the musicians. In 1983 Petr Kofroň together with Miroslav Pudlák and Martin Smolka founded the Agon Orchestra, an ensemble devoted exclusively to contemporary music. As conductor and repertoire director of the Agon Orchestra Kofroň “discovered“ many important foreign and Czech composers for the Czech public. From October 1996 to June 2004 Kofroň was head of the Pilsen Opera, where he presented a number or remarkable productions. Kofroň is also a notable essayist and the author of books on music (e.g. Graphic Scores and Concepts, co-authored with M. Smolka).
www.petrkofron.com, www.musica.cz/kofron

The first part is a living crystal. A ray of “melodies” runs through the crystal, and these colour it in different ways. The second part is a petrified crystal. All the events of the first half of the piece seem to flash and twinkle inside it, while it is not clear whether these are not just delusions.

Pavel Zemek
Unison I for four saxophones (2004)
I. Der Bach und die Zeit
II. Der Fluss und die Zeit
III. Der See
Bohemia Saxophone Quartet
Pavel Zemek-Novák (*1957) studied oboe and composition at the Brno Conservatory of Music, continued his studies with Miloslav Ištvan at the Janáček Academy of Performing Arts (JAMU), and later completed his education with a scholarship in London (1992–3, with G. Benjamin) and in Paris (1997–8, with G. Grisey). He was employed as the first oboist of the orchestra of the Janáček Theatre in Brno. Currently he is on the stafF of the Brno Conservatory, where he teaches composition. For the last ten years approximately he has been exploring the technique of unison and the exclusive use of consonances. He has written around 100 pieces of music.
www.musica.cz/comp/zemek.htm

The piece is a concise reflection on time, its flow and its layering.

Ivo Medek
Wings (2005)
members of the Ensemble Recherche together with students of JAMU,
Zsolt Nagy – conductor
live workshop concert recording, courtesy of Czech Radio Brno
Ivo Medek (*1956) graduated from the Technical University of Brno (where he studied computing and software) and from the Janáček Academy of Performing Arts (JAMU), where he studied composi-tion with Alois Piňos. Medek has composed more than fifty chamber, orchestral and electro-acoustic works, operas and multimedial projects, many of which have been performed at celebrated concert venues both in Europe and in the USA and have earned him awards and prizes in various competi-tions. Music theory is another of his great interests. Over the last years Medek has been gradually evolving his own particular method of composition characterized primarily by the building-up and organization of various independent musical processes. In 1985, together with Zdeněk Plachý, he founded an ensemble for contemporary music Art Inkognito (now Ars Incognita), and led it up to 1990. In 2000 he co-founded the Marijan Ensemble specializing in improvised music and the realization of multimedia projects. Ivo Medek has been teaching at various universities since 1982, and at the JAMU since 1990. He has given lectures and classes at a whole range of music academies and faculties abroad. Since 2002 he has been the dean of the Music Faculty of JAMU.
www.musica.cz/comp/medek.htm

Wings have fascinated me as far back as I can remember. Perfectly natural, perfectly functioning, perfectly inimitable. Laughing serenely at our hi-tech perfections. And all the time it is just a movement down and then back up again – sometimes slow and majestic, at other times in the frenzied invisibility of vibration…

Ondřej Štochl
Tetralogue (2006)
I, II, III attacca IV
Petr Nouzovský – cello, Ondřej Urban – technical co-operation
Tetralogue for solo cello and electronics (2006)
Ondřej Štochl (*1975) studied at the conservatory in Prague and then at the Academy of Performing Arts in Prague with Marek Kopelent. Currently he is chairman of the composers’ society Konvergence and artistic leader of the chamber ensemble of the same name. He also teaches. His music is lyrical and often has non-musical connotations that are either entirely abstract (e.g. the expression of the contrast between the experience of development and stasis) or concrete (a particular text, an experience of his own…). What is distinctive about his music is unconventional instrumentation combined with atonal harmony moving between two equally important opposite poles – the harmonic series (an expression of stability) and harmony in fourths (an expression of instability). The composer’s aim is to express stasis in music, to create an illusion of “time-lessness” that is then juxtaposed with more dynamic, evolutionary music.
www.musica.cz/stochl

What intrigued me was the possible parallel between four character types and the four strings. The cello is an instrument with a range covering all the nuances from the phlegmatic lowest register to the intensely choleric (hysterical) highest register. This is why the Tetralogue consists of four movements for four strings about four character types. Not that each movement is only about one type of personality; in fact all the types run through the whole piece, although one of them is dominant in each part (as is the case in most of us). This means that the individual movements may be described as follows:
I. a sanguine character, who sometimes – almost in a melancholic way – succumbs to his emotions
II. a phlegmatic capable of nervousness and (choleric) quick temperedness
III. a choleric whose behaviour has a touch of (sanguine) rationality
IV. a melancholic, who seeks the stability of a phlegmatic when in the grip of emotions

Martin Smolka
Oh, my Admired C Minor (2002)
I, II, III
Ostravská Banda, conducted by Petr Kotík
Martin Smolka (*1959) studied composition at the Academy of Performing Arts in Prague and privately with Marek Kopelent. In the years 1983–1998 he co-directed the Agon Ensemble. His compositions have been performed in many places in Europe and North America, and he also writes music for theatre and film (in a selective spirit). Starting out from two different movements, Webernism and minimal music, Smolka arrived at a kind of concrete sonoristics, i.e. he worked musically with instrumental sounds reminiscent of familiar noises (ship and train sirens, the rumble of machines, the sounds of rain and many others), and these sound reminiscences helped to define the often nostalgic, sometimes grotesque idiom of his music. Since 1998 his style has shifted from sonoristics to work with tones, and even with typical elements of traditional music such as the minor third or string cantilena, but these are deformed, partly by microtones and partly by collage-style compilation.
www.martinsmolka.com, www.musica.cz/msmolka

This piece is another attempt to breathe new life into old, hackneyed musical elements – this time the minor triad and minor melody. See it as a visit to a junk-shop. The charming little shop if full of bits and pieces of a vanished world. Right above the door hangs a fragment of a beautiful Romantic melody, whose unstuck notes scarcely hold together any more and each has a different colour. Just behind it loom once majestic epic chords, now dreadfully out of tune and rather squeaky. Dust, dim lighting, all kinds of smells. In the middle of the room hang polished arpeggios, a little way beyond them tin chords are rusting, completely warped and a little cracked. And so on. You go out and you can‘t decide whether it delighted you or whether it made you frightfully sad.

Peter Graham
The Lunch Break in a Factory of the Future (String Quartet No. 3) (1991)
I – Construction of Changing Emotions, II – Expectation…, III – …et Danse, IV – Die Grosse Fuge (nach Beethoven)
Silesian Quartet
Peter Graham (Jaroslav Šťastný-Pokorný, *1952) studied organ at the Brno Conservatory, and went on to study composition under Alois Piňos at the Janáček Academy of Performing Arts (JAMU). Graham says of his own music that it “grows like wood in a forest”, without predetermined plans and goals. He is concerned with creation itself rather than with the cultivation of the personality: “I am what I do.” Several of his works have met with success when performed in Great Britain, Germany, Poland, Austria, Italy, Romania, Holland, Sweden, France and USA. Peter Graham has recently been teaching at the JAMU and he is the programme director and organizer of the Exposition of New Music festival, one of the most important Czech festivals focused on contemporary music. Graham is the author of several books on music and essays.
www.musica.cz/graham

The workers stop their machines, take musical instruments and play music to fill the lunch break. The 3rd string quartet is dedicated to my father who – as an amateur cellist – was always longing to play in a quartet, to Dr. Eduard Herzog who introduced me to the greatest string quartet recordings, and, of course, to the Welsh Arts Council which inspired me to write this piece.