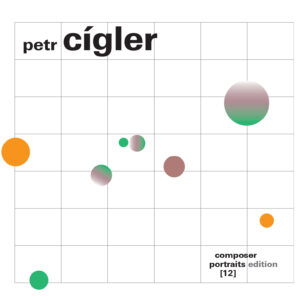 Portrait of the composer Petr Cígler.
Would you like to get this CD? Send us an e-mail.

Petr Cígler is a composer, horn player, and chemist. Though he has no formal education in composition, he has devoted himself to it in collaboration with performers and festivals. For him, music counterbalances his vocation in science and inspires his work (he currently heads the scientific team in synthetic nanochemistry at the Czech Academy of Sciences). Cígler is interested in organising and manipulating sounds and working with acoustic phenomena, and enjoys collaborating with advanced and enthusiastic performers. His work includes orchestral and ensemble compositions for Ostravská banda, BERG Orchestra, ONO – Ostrava New Orchestra, and MoEns, and his music has been presented at festivals in Czechia (Prague Spring, Ostrava New Music Days, NODO opera festival, Exposition of New Music), Great Britain (Huddersfield Contemporary Music Festival), the USA, Germany, and Switzerland. His composition Ueber das farbige Licht der Doppelsterne was commissioned by Westdeutscher Rundfunk Köln and premiered in a live broadcast on WDR 3. His pieces Entropic Symphony and Daily Patterns represented Czechia at the International Rostrum of Composers (IRC) in 2013 and 2016, respectively. Daily Patterns was recommended by IRC for broadcast in over thirty countries. Cígler’s opera The Protracted Sinuous Movement of a Longitudinal Object was commissioned by and performed at NODO festival in Ostrava in 2016.